Data solutions for the DataCenter - Part 2

In the previous note in this series of publications on Data Solutions for the Datacenter we discussed the concept and history of electrical communications as well as the development of data networks since the appearance of the first minicomputers in 1963. This following topic will go deeper into the language of networks, taking into account the basic logical/physical level topologies descriptions through connection or coverage.

Now we must become familiar with the networks language so in this note we will discuss the basic topologies descriptions at a logical/physical level according to its connection or coverage. We will end this note with an introduction to the OSI reference model, which will be developed in future notes. For now, let us understand the main Network Topologies known/used in the market.

ACCORDING TO ITS INTERCONNECTION

Below you can find the network topologies according to the way they connect terminal equipment: 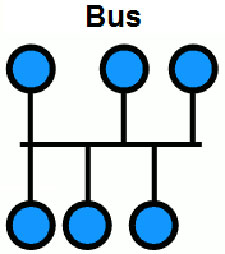 Bus: characterized by having a single communication channel (called bus, trunk or backbone) to which different devices connect.

Ring: there is a connection between each station and the next one, and the last station is connected to the first one to close the loop or "ring".

Star: each and every one of the stations are connected directly to a central point and all communications must necessarily make it through.

Mesh: all elements have connections with several of the other nodes

Tree: The nodes are arranged in a tree form. From a topological view, the connection tree is similar to a series of interconnected networks in star except that they do not have a central node.

Mixed: the combination of any of the above topologies.

It should be noted that when speaking of network topologies, we are using terms that are valid to refer to the physical connection and also to the connection/logical operation of these devices, so it is important to clarify the context under which we refer these topologies.

Another way to define network topologies, is according to their coverage area. In this context we talk about:

PAN: Personal Area Network is used for communication between devices/computers near a person.

LAN: Local Area Network: is a network limited to a specific and relatively small area: a room, a building, a company, a Data Center. Internet and connection equipment, as well as equipment connecting to other networks, are considered as LAN delimiter equipment. LAN does not use public networks to link devices.

WLAN: Wireless LAN (Wireless Local Area Network): wireless data communication system, widely used as an alternative to wired LANs or as an extension of these.

CAN: Campus Area Network: communication network interconnecting LANs at high speed in a limited geographical area (does not use media/public networks), such as a university campus, a military base, hospital, etc.

MAN: Metropolitan Area Network: high-speed network that covers a wider geographical area than a campus, but still limited. For example a network that interconnect public buildings in a municipality within the city through optical fiber.

VLAN: Virtual Local Area Network (Virtual LAN): sub-set of logic-level grouped devices, but are "together" as a single LAN, even when physically they are on different LANs, and may include: computers, printers, storage, etc. This type of topology arose in response to the need of segmenting equipment connections between buildings at a logical level, which allows to split a switch into multiple virtualities.

Along with the development of networks that occurred in the 80s, disorder also appears because networks grew in size, quantity, different manufacturers, connection types, communication protocols. There were difficulties for the proper exchange of information between networks that were using different specifications and implementations, and in the same way, it happened with the developers of connection technologies.

In order to solve the problem of incompatible networks, the International Organization for Standardization (ISO) researched different interconnection models (DECnet, Systems Network Architecture and TCP/IP) in order to find a set of rules generally applicable to all networks. Based on this research, the ISO developed the "OSI Reference Model", which allows manufacturers to create networks that are compatible/interoperable with other networks. The model defines standards based on seven layers that define the different phases through which data must travel from one device to another over a communication network. 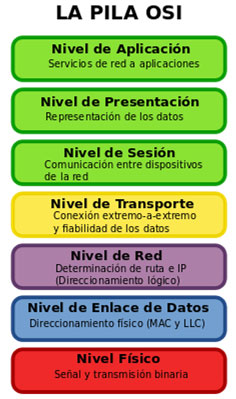