Vascular biometrics - is it the future? | Anixter

Vascular biometrics - is it the future?

Biometric recognition relates to the automatic identification of individuals based on their physiological and/or behavioral characteristics. Today, the use of biometrics is very common, whether for access control in residential/commercial buildings of high standard, in schools and/or hospitals and even for ATMs of banks. Digital reading is one of the most familiar types of biometrics, however, there are other interesting technologies, which are also responsible for automatically identifying specific physical characteristics from other parts of the body such as the iris (eye), the face, the hand geometry, and vascular distinction.

Vascular biometrics – Is it the future?

The biometric recognition refers to the automatic identification of individuals based on their physiological and/or behavioral characteristics. Using biometrics we are able to verify the identity of a person based on a single information, "who she is", rather than knowing "what she has" (a card or a key, for example) or "what she knows" (a password, for example).

Currently it is very common the use of biometrics in the day-to-day labor or in the access control for high-standard residential/commercial buildings, schools and hospitals or even bank’s ATMs.

When we hear about biometric recognition, we usually think of digital biometrics. Means reading specific points such as bifurcations and endings formed by the ridges and elevations in our fingerprint.

However, there are various technologies, some few known by general public, which identify specific physical characteristics, just like digital reading does, from other parts of the body, such as the iris (eye), the face, the geometry of the hand and vascular.

The veins format is captured through the principle of transmittance in the image, a beams absorption difference process from the infrared spectrum (NIR - Near Infrarred and FIR - FarInfrarred), similar to that used by CCTV cameras for viewing on SEM environments.

Because of ferrous blood composition, the hemoglobin present in the veins and capillaries in the subcutaneous layer absorbs more infrared spectrum than the muscle tissues of the body, and it is precisely there that we have a difference of absorption, transmittance.

Thus, a sensor which detects only the infrared spectrum can differentiate what are muscle tissues and what are veins and capillaries. This sensor can be a CCD camera with a visible light filter. 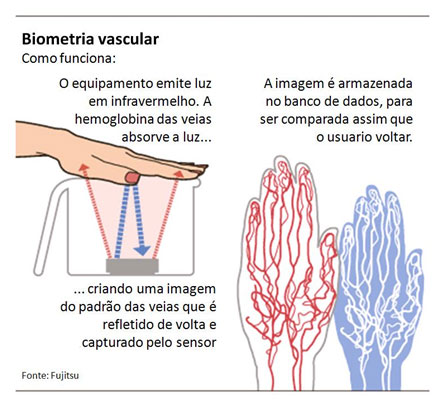 How it works: The equipment emits infrared light. Veins’ hemoglobin absorbs light, creating a veins standard image, which is reflected back and captured by the sensor

The image is stored in the database, to be compared when the user returns.

From a series of algorithms and processing of the captured image, capillaries and specific points are verified and used for identifying a person.

• Lack of print: in people with diabetes, the elderly, or those who handle chemicals or work at construction, for instance.

Moreover, it is virtually impossible to avoid or copy the pattern of veins that we have within our hand/finger, precisely because the identification element is inside the body.

Furthermore, when lack of blood flow or oxygen, the decreased Infrared absorption it is all it takes, getting a muscular tissue uniform image, without any presence of veins. This is also an indicator that the person is alive.

Another great advantage of this technology is that it can be built to operate without a person’s contact with any surface or base for collecting biometric data. This enables the application in places where it is necessary to maintain a high level of hygiene, such as operating rooms or pharmaceutical industries or food.

The complexity of the vascular image can be controlled so that the amount of information is much higher than the fingerprint and thus obtaining very low levels of false positive/negative.

The image data compression can be performed for template-form storing (biometric information of a person), either inside a reader, a biometric server, as well as Smart Card/MIFARE cards. Thus, allowing access to a site or in format 1: 1 to 1: N. 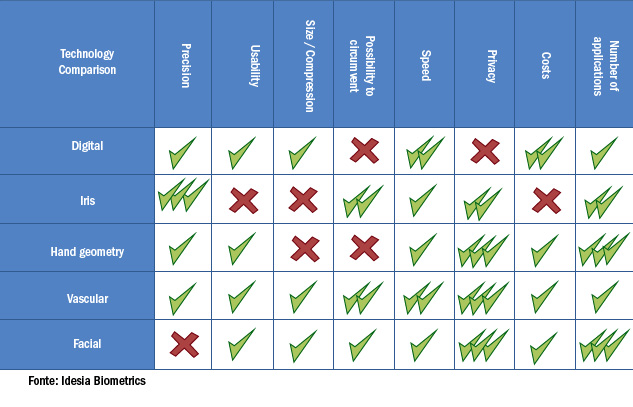 The comparative table from existing technologies (above) was performed based on data provided by different biometric readers manufacturers. Typically, they measure a technology for the false positive rate, false negative, performance around the decision limits, among other parameters.

The scan speed of any biometric system is measured by the time the system needs to collect biometric data, process the template, and compare it with the database to identify the person.

In the case of vascular biometrics, tests evidence similar speed of digital technology, thus allowing such use in locations with high flow of people, such as airports, schools/universities and commercial buildings.

This technology is relatively new but has gained lot of attention from those involved in the market. This is due to numerous studies that have been conducted to develop and confirm the technology as one of the best programs.

In Brazil has still not been much publicized, but there are already some companies and banks working with vascular biometrics. Outside Brazil the number of manufacturers that are developing products with this technology has grown.

With the electronic security market professionalization, particularly in access control, and demand for smarter and safer solutions, we strongly believe that this technology will be more present in our lives, but will not fully replace the digital biometrics, because of costs, mainly from low quality technologies (high false positive/negative rate). 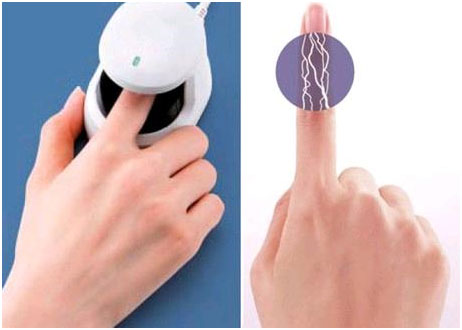